Sheikh-ul-Islam received the Ambassador of Belarus

09.02.2021
On February 9, Chairman of the CMB, Sheikh-ul-Islam Allahshukur Pashazadeh received Ambassador Extraordinary and Plenipotentiary of the Republic of Belarus to Azerbaijan Andrei Ravkov.
Welcoming the guest in Azerbaijan and wishing him success in this responsible position, the chairman of the CMB stressed that Belarus and its people have a special place for Azerbaijan. Noting the existence of traditional friendly and fraternal relations between Azerbaijan and Belarus, Sheikh-ul-Islam stressed that the fraternal relations between the two heads of state, His Excellency Ilham Aliyev and His Excellency Alexander Lukashenko, further strengthened these ties.
Sheikh-ul-Islam A. Pashazadeh expressed his special gratitude to Belarus for its support to our country during the 44-day Patriotic War, which resulted in the liberation of the ancient lands of Karabakh. The chairman of the CMB noted that this historic victory was possible due to the extraordinary efforts of the President, His Excellency Mr. Ilham Aliyev, the close unity of our glorious army and the entire Azerbaijani people around the President.
In his turn, Mr. Ravkov thanked His Virtue Sheikh-ul-Islam Allahshukur Pashazadeh for the warm reception and informed about his visit to Jabrayil and Zangilan districts last week at the invitation of the Foreign Ministry of Azerbaijan. Mr. Ambassador said he was deeply affected by the views of destroyed houses, temples, cemeteries and natural landscapes in the liberated lands. He stressed that the Azerbaijani state has a lot to do here and wished success to our country. 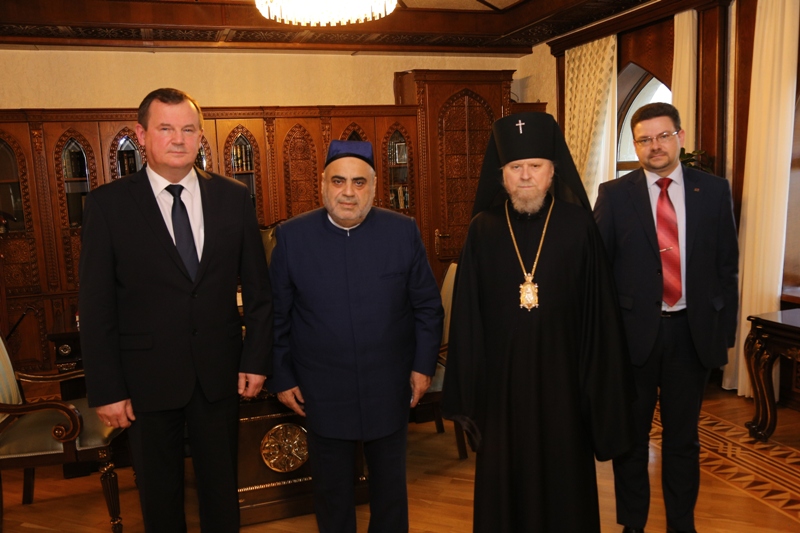